A Symbol Of Hope

Cast from shackles which bound them, this bell shall ring out hope for the mentally ill and victory over mental illness.

During the early days of mental health treatment, asylums often restrained people who had mental illnesses with iron chains and shackles around their ankles and wrists. With better understanding and treatments, this cruel practice eventually stopped. 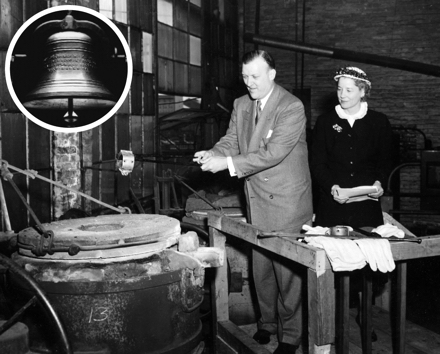 Maryland Gov. Theodore McKeldin and Mrs. A. Felix DuPont in 1953 pour the metal made from melted chains used to restrain people with mental illnesses to create the Mental Health Bell.

A Victory Over Mental Illness

Over A Century Of Awareness & Support

Now the symbol of Mental Health America, the 300-pound Bell serves as a powerful reminder that the invisible chains of misunderstanding and discrimination continue to bind people with mental illnesses. Today, the Mental Health Bell rings out hope for improving mental health and achieving victory over mental illnesses.

Over the years, national mental health leaders and other prominent individuals have rung the Bell to mark the continued progress in the fight for victory over mental illnesses.

Mental Illnesses are brain-based conditions that affect thinking, emotions, and behaviors. Since we all have brains – having some kind of mental health problem during your life is really common. No matter what kind of mental health problem someone is facing, it is always possible to get better. If you think you’re experiencing a mental illness, try to find any kind of support earlier than later. Like other illness, treating mental illnesses early can help you get better faster.

We welcome the opportunity to assist you! We are available via phone, text, and email most weekdays. Please call 859.684.7778 or email mhaky@mhaky.org if you have urgent questions that are not covered here at this time!